Patronal Dinner at the Phoenicia Hotel, Floriana, on Saturday the 4th December 2021 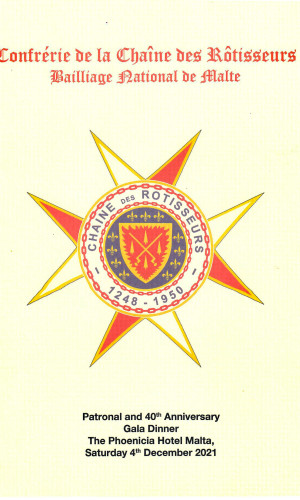 M. Charles Gatt, our Chancelier, welcomed members and their guests to the final event of the year at the commencement of his pre-dinner speech.

He started by referring to the elevation of the Bailli Delegue of our Bailliage, Dr.Joseph Xuereb, to a member of the Conseil Magistral.  This is both an honour for him and also for a small nation like Malta. Marie Jones, the International Vice-President of La Confrérie de la Chaîne des Rôtisseurs informed Dr. Xuereb that he had been voted in unanimously.

The dinner was held in the Maryanski Porch. This room is named after a famous Russian artist who was commissioned by the Phoenicia to produce the numerous paintings around the four walls.

Present were a number of members who had joined the Bailliage in its formative years, namely Grand Officier Janatha Stubbs, and three Officier Commandeurs, Jost Merten, Marc Besancon and Bernd Ritschel.

The Chancelier mentioned that the Board is preparing for a Grand Chapitre which will be held on the 28th and 29th October next year (always if Covid-19 permits). The Board is also working on the choice of venues for next year and it is hoped a calendar of events for 2022 will be released in early January. We anticipate reverting to the normal number of dinners with additional OMGD events prepared by our Echanson Dr. Ramiro Cali-Corleo.

The dinner menu was created by chef de cuisine Daniel Debattista. The wines were supplied by Atelier Michael Tabone. The selected wines were paired with the courses by Michael together with our Conseiller Gastronomique Albert Cilia- Vincenti.

Finally, Charles wished all members, their guests and families a very Happy Christmas.

Conseiller Gastronomique Albert Cilia- Vincenti then highlighted the characteristics of all the wines to be served with the dinner.

The full menu was as follows:

The canapes were very appetizing and tasty, the mix of celeriac and quail eggs worked very nicely

The champagne was not particularly aromatic with a medium acidity

The Reisling was well balanced with a good minerality and acidity, with notes of peach and a bit of herbaceousness

The risotto was very rich but at the same time not heavy. The crispy confit chicken added a nice texture to a very smooth and well-cooked risotto. Our Conseiller Culinaire Marc Besancon especially complemented the chefs on this dish

The main course of beef fillet Rossini was well executed. The celeriac and Potato Dauphinoise were a very good accompaniment and the fact that the accompanying sauce was served on the side was very welcome. Too often some chefs leave out the sauce for the sake of a neat presentation. Instead, we could appreciate the presentation before and still enjoy the dish with the right amount of Jus Bourguignon.

2015 is considered a very good year for Bordeaux. The wine had a bright acidity and smooth tannins with the expected nose of raspberry and blackberry. On the palate it felt medium bodied with again red and black fruit and a long finish. A great match with the main course.

The cheese plate was very well received by the guests as an alternative to the usual sweet dessert.

This Sauterne is highly rated by critics and is considered to be one of the top ten Sauternes. The sweetness was well balanced by the acidity with orange citrus on the nose and full bodied with apricots and peach on the palate. The length was good.

The comments on the food and wine were prepared by Conseiller Culinaire M. Marc Besancon and Echanson Dr. Ramiro Cali-Corleo.

And a little anecdote……

Renowned across Europe for his appetite and attention to all things culinary, Rossini inspired many chefs to name dishes for him. One thing these recipes have in common is a luxurious ingredient: the truffle. In fact, today his name is almost synonymous with truffles. When you see Poached Eggs à la Rossini, Chicken à la Rossini, or Fillet of Sole à la Rossini, you can assume there will be truffles on the plate.

There is an amusing anecdote about Rossini’s favorite dish – truffled turkey – falling over the edge of a boat on a picnic. It is said that the loss of this meal was one of only three things in his life that brought the great composer to tears.

The dish comprises a beef tournedos (filet mignon), pan-fried in butter, served on a crouton, and topped with a hot slice of fresh whole foie gras briefly pan-fried at the last minute. The dish is garnished with slices of black truffle and finished with a Madeira demi-glace sauce.

The birth of Tournedos Rossini is also said to have occurred at the Café Anglais in Paris. Chef Adolphe Dugléré was dubbed “Mozart of the Kitchen” by Rossini, and the story goes that the chef was preparing a filet table side for him while trying to protect the secrets of his technique. Rossini reportedly said, “Eh bien, faites-le tourné de l’autre coté, tournez-moi le dos!” (“Alright, do it somewhere else. Turn your back on me!”). And so, in French, the phrase “to turn one’s back” — tourner le dos — became tournedos. It’s an enjoyable story, but almost certainly just that.

Patronal Dinner at the Phoenicia Hotel, Floriana, on Saturday the 4th December 2021
View